The primary library in Anaconda for performing complex scientific calculations is scipy. It includes 82 built-in distribution functions. You can test how well a distribution applies to a sample using the fit() function.

Someone online was nice enough to write a script that iterates over every included distribution function and finds the best fitting one. This calculation takes quite a while to run. I tried running it on the Main power data with my school hours filter: 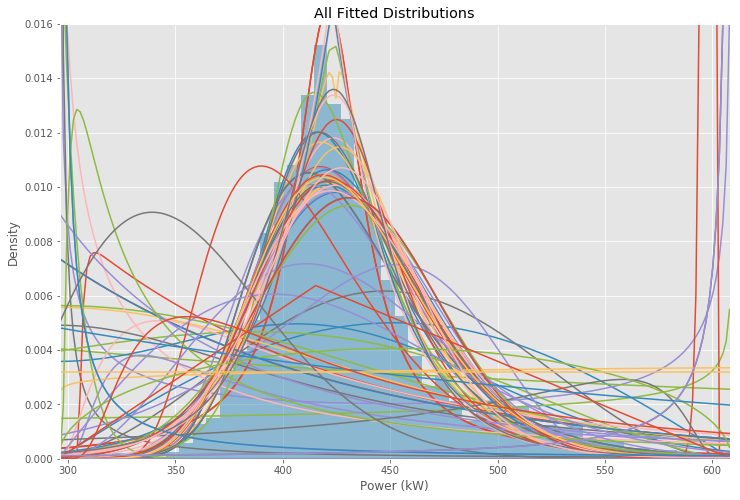 Scipy says that the Johnson $S_U$ distribution is the closest fit across all Main power entries. Perhaps that distribution could serve as a reference for subsets of that data.

I was hoping I could just use a normal distribution as the reference for my time slices, but it doesn’t seem to be effective. Scipy has a normtest function that calculates the P-value of a sample coming from a normal population (documentation). Everything I feed to it generates an extremely small P-value (like, numbers to the power of -60), so even if I set $\alpha=0.01$ every sample would be considered abnormal. I know that the function works though, because if I generate a normal sample with numpy it gets acceptable P-values.

A second glance at the Kolmogorov-Smirnov test

I spent a lot of time taking a second look at the Kolmogorov-Smirnov test. Scipy has KS tests built in but it was a trick to set up my distribution as a callable CDF. I figured maybe I could use the Johnson $S_U$ distribution that was calculated earlier and compare subsets of my data to that, however I’m still paranoid that this is not statistically valid.

I already mentioned that when testing normality with KS you shouldn’t estimate the population distribution from the data. But Wikipedia goes so far as to say that whatever the distribution, it shouldn’t be estimated from the sample. I suppose it depends what I define as “population” vs “sample”. Is my population just all of the data that I have (i.e. a population would be something like df_school['Main (kW)'] and a sample would be just the data on a certain day or from a certain time)? If I’m being really strict, the “population” data would be an infinite number of power recordings starting at the origin of AHS.

So everything I have is just a sample, and stratifying that data just makes smaller samples. Wikipedia isn’t explicit about the restrictions on a 2-sample KS test, but this forum post says you can’t compare a sample with a subsample that way. A random internet post isn’t the most trustworthy source, but I’d rather be safe than sorry.